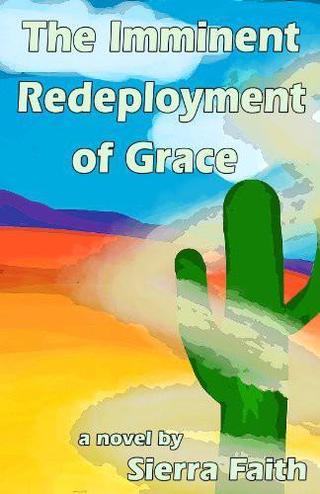 The Imminent Redeployment of Grace


In one beautiful, insane act of power, she throws what's left of her life in the back of her 1975 Volkswagen Rabbit, tosses a kiss to the mountain at dusk, and hits I5 south, house key left on the kitchen table next to the banging screen door.

“I'm forty-four years old and not much to show for it, save a quiet mind and a loving heart, occasionally.”

There's method in this madness, and as she tunes the radio to KDOVE and belts out “There's Gotta be More to Life” with Staci Orrico, a latent strand of undomesticated logic begins to work its way to the surface of her nervous system. Cat in carrier, decaf in cup holder, $556.00 dollars in her wallet . . . Life is good. One of the great things about being a single adult is that no one can tell you what not to do anymore:

“Don't give up that job . . . It took so long to get decent employment.”
“Don't dye your hair red again. As women get older, they need to go lighter around the face.”
“Don't leave now, just when you're finally getting settled.”

That word, settled . . . For years all she wanted was to be settled: home, community, purpose, partnership. Michael W. Smith begins to sing “My Place in this World” as she starts the climb to the summit and Mount Shasta rises up. It's a distinct feeling, being done with a place, standing at the turning point, knowing that you can reinvent yourself, again, now, and find a way to stay, or you can pull up the shallow roots and head outta town, blown by the winds of destiny to some farther shore.

"I can make it to Redding by nine if I boogie, catch a bite to eat, and then head due east, over the mountains and into Nevada. Some cheap hotel in the desert will take cats and stray women."

Too much static for clear reception on the Ashland stations, so it’s time to tune into country and just let it ride to the sounds of “I Melt” by Rascal Flatts. There’s really no destination here, just a vague sense of direction and an urge to be propelled by life toward the next day, and then the next night, and then the next day again. The camping gear is on the back seat, and a journal, pen and book light are in the glove compartment, along with sugar-free gum and a disposable camera.

Who knew? She'd mentioned to a few friends that she was thinking of relocating to the East Coast next winter, hoping for a change in the weather, and possibly resuscitating that old vision of a writing career. Gotta do whatcha gotta do . . . A house on the shore in Connecticut, fireflies in upstate New York, the shadow of a truly unavailable man who could bleed the life from her spirit with his pathological laissez-faire, the kind of man who can chew you up and spit you out, except he doesn't even really chew . . . He just kinda gums your essence, then discards it on the side of the plate.

Somehow all of this was losing its pull in the eerie green light of the dashboard and the falling of night. Intentional community in Iowa this autumn? Anasazi ruins in New Mexico for a week or two? Luckily her cat thinks it’s a dog, and stays close to her when it’s set free to wander.

Martina McBride is sobbing “How Far” as moonlight hits the snow on Mount Lassen, and a zillion stars come into view.

So far it’s been a pretty good day.

Once I met a little boy at an AA meeting on the Big Island of Hawaii whose mother was really poor. This child told me how much he loved taking baths, and how much he wished they had a bathtub at home. I went out and bought the biggest metal wash pan I could find, definitely big enough for this kid to sit in, comfortably. I brought it to the same AA meeting the following week and gave it to him. I was able to go for maximum positive impact in the midst of a highly self-absorbed episode of living, and something broke open inside of me, some nurturing instinct that repolarized my energy, and allowed me to sleep well for one more night. That was enough. That is enough.

Keith Urban with “Who Wouldn’t Want to be Me?” and the eastern decline of the foothills. Can’t see much, but she knows that any road is a good road when her head is filled with generous memories and resonant possibilities.

Absolutely Adored: Stop Choosing Narcissistic Men and Finally Be a Well-Loved Woman
This book is a romantic re-education for women who have habitually chosen narcissistic men.